The Society was created officially in 1991, but found its roots in informal and formal meetings among attendees of ICAAC and other major Conferences deraling with Chemotherapy around the years 1986-1989. An historical landmark in this venture was a meeting held in Stockholm, Sweden, in June 1989, organized by W.A. Craig (Madison, WI) and Otto Cars (Upssala, Sweden) where several of the future founding members discussed the importance of pharmacodynamics and pharmacokinetics for the apropriate, and possibly improved use of antibiotics. 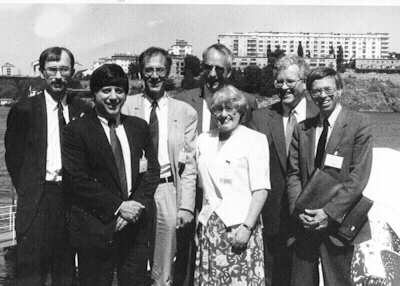 
While various names were considered for the scientific group to become a Scientific Society (such as AIDA, which stood for 'Association for the Improvement of the Dosing of Anti-infectives, or OTELLO, which was for 'Organization for Terminating and Eliminating all Little Living Organisms', all denominations obviously denoting the interest of the Fouding Members for Opera in addition to pharmacodynamics), a decision for International Society for Anti-infective Pharmacology (ISAP), to stress upon the importance of Pharmacology as the basic science on which our activities needed to rely, was eventually reached at a meeting held in Atlanta, GA in the fall 1990.

The Society was created in July 1991 in Berlin, Germany, after having organized its first scientific meeting as an official symposium of the 1991 ICC (International Conference on Chemotherapy). It was later (1993) incorporated as a scientific organization under the laws of the State of South Australia, Australia (mainly because the secretary was from Australia...).  Later on, the chart of the Society was moved to the State of California, United States of America, where the Society is now incorporated.

Over the years, the Society has made several meetings and symposia which are described in the section "Past Meetings" which can be found in the archive.

The PK/PD world has lost a leader and pioneer. Dr. William A. Craig has passed away Wednesday March 11, 2015 and our thoughts go out to his family, friends and colleagues that are too numerous to name. The inspiration and innovation of Prof Craig has shaped most of the research in anti‐infective PK/PD. He will rightly be remembered as a humble, but brilliant man who has provided a base upon which antiinfective pharmacology has been able to grow into an essential part of drug development, drug optimisation and clinical practice.
Editorial in AAC
Orbituary