A 2 day course on PK/PD of anti-infectives was held as a pre-meeting to ECCMID at April 20 -21 2022 in Lisbon, Portugal. The course was organized in collaboration with EPASG and very well attended. 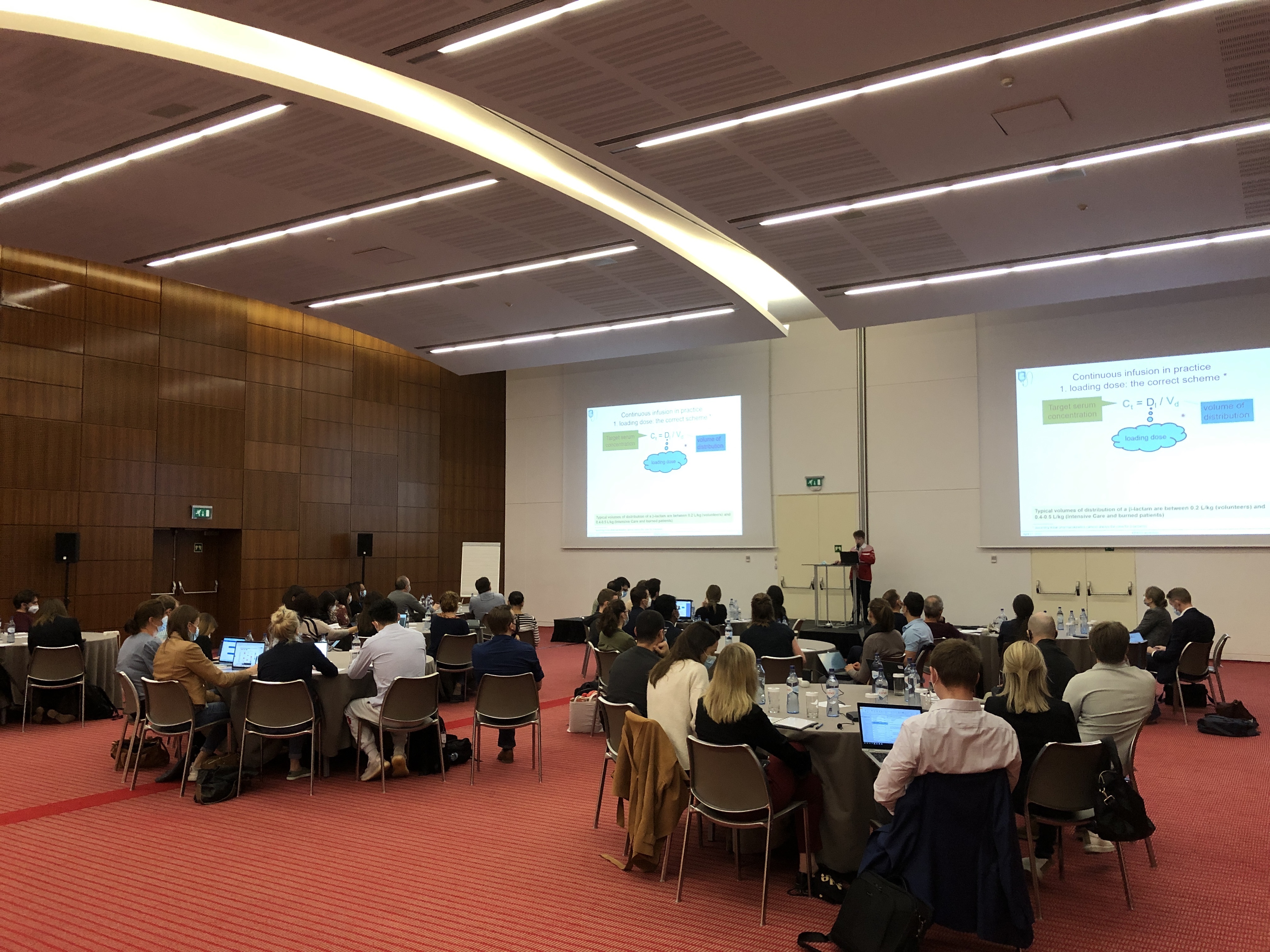 The program of the course can be found here.

Immediately following the educational course, we held our general meeting and reflected on our scientific and educational acitivities of the past two years, followed by the traditional ISAP Young investigator session, chaired by Dr. Alina Nussbaumer-Pröll (Vienna) and Dr. Vincent Aranzana-Climent (Poitiers).

The slides of the general meeting can be found below. Access is restricted to ISAP members (please login to view attachment).

The audience voted for the best Young Investigator presentations: 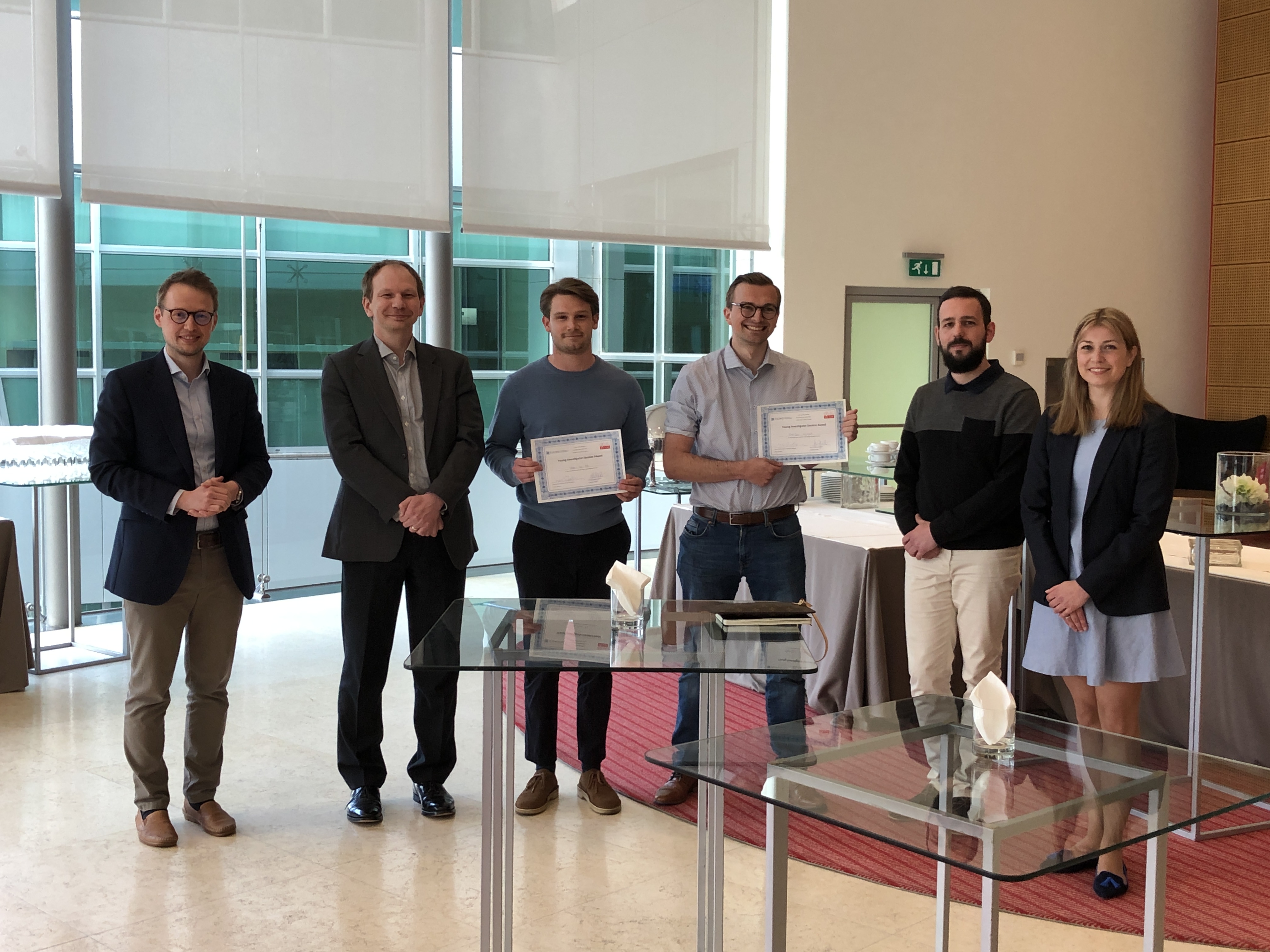 All attendees of the ISAP meeting.

The ISAP 2021 meeting was held as a full day virtual conference in collaboration with EPASG on Friday, November 12 2021 - Saturday November 13 2021 as a online meeting. 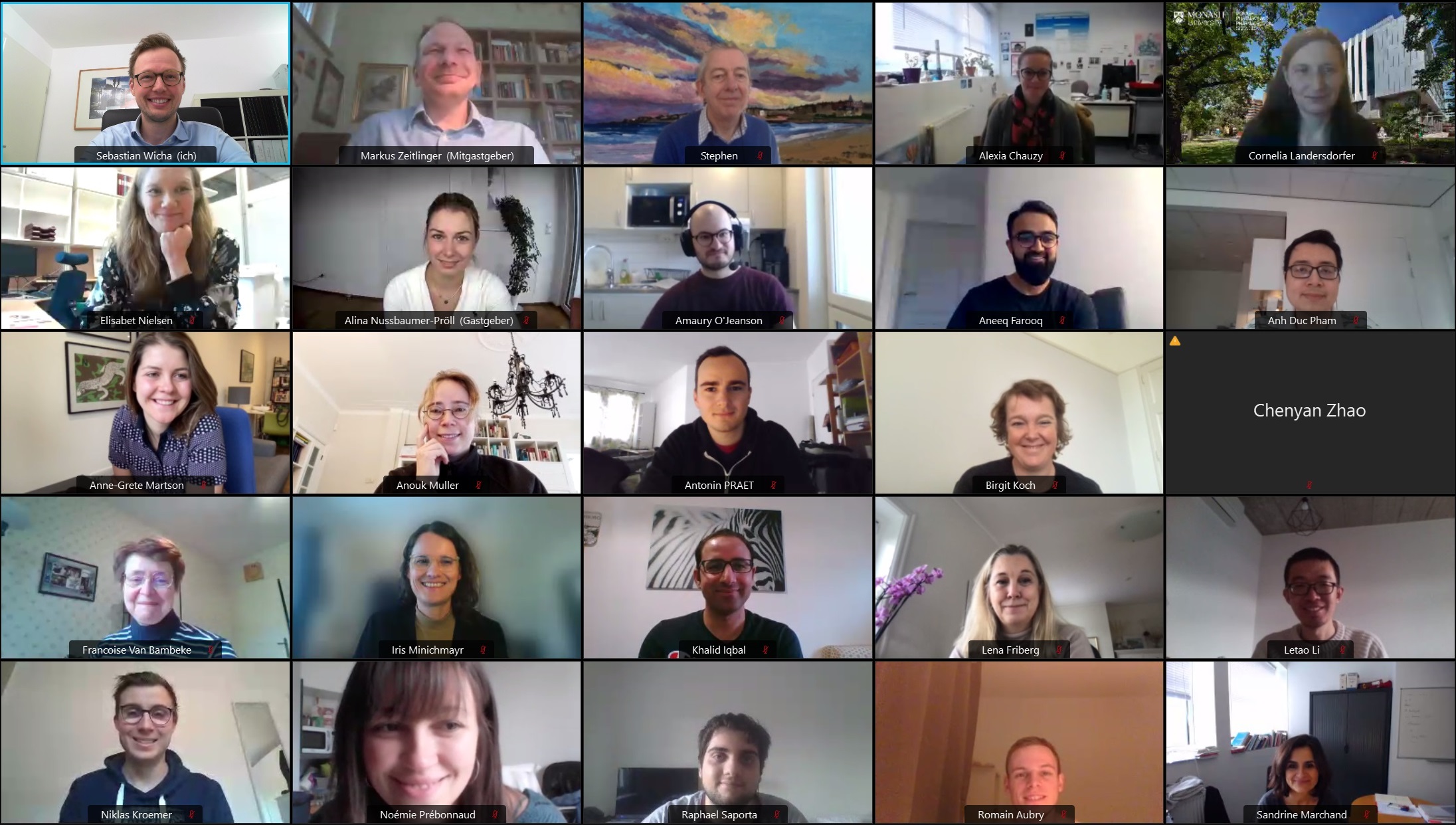 As per the ISAP tradition, Young Investigators presented their research in the traditional Young Investigator session. The presentation topics ranged from pre-clinical, mechanistic PK-PD studies up to clinical applications of PK-PD. All research was presented very comprehensively and to the highest scientific standards.

The attendees voted the best three presentations who recieved the Young Investigator Awards 2021:

Brian thanked all retiring Council members for their outstanding services to ISAP, without whom the society would not be the same as it is today.

All members thanked Brian Tsuji for his amazing work he has done as President and beyond. He provided a collegial leadership to ISAP, was a huge supporter of all Young Investigator activities and organized scientific symposia and strategically liaised new collaborations for ISAP. THANK YOU, Brian!

It is a great to have so many new members on board to join and shape the future of ISAP!

In collaboration with EPASG, there will be a webinar on “Modeling SARS-Cov-2 viral dynamics to optimize therapy”, by Dr Jeremie Guedj from INSERM, Paris, France held on November 24 2020 4PM CET. The details to join the meeting will be provided in another newsletter. Welcome!

A pre-conference to the ASCPT meeting titled “Translational and Clinical Pharmacology Advances in Anti-Infective Development” was planned for March 18 2019 in collaboration with ASCPT and SIDP. The ISAP contribution was organized by Hartmut Derendorf. A number of ISAP speakers (Lena Friberg, Corneial Landersdorfer, Sebastian Wicha) were scheduled for contributing presentations to the pre-conference. No follow up meeting is planned at this stage, but instead a call for papers to a special issue on Anti-Infectives has been launched in Clinical Pharmacology & Therapeutics. Read more here, in case you wish to contribute.

ISAP contributed a clinically-oriented session on “Pharmacology of Antibiotics” to the International Symposium on Intensive Care & Emergency Medicine (ISICEM). Iris Minichmayr and Sebastian Wicha were scheduled to contribute presentations on PKPD relationships of antibiotics and interactive case studies for dose individualization. At this stage, the conference is re-scheduled for March 2021. Read more here, in case you are interested to attend.

As you all know, the current situation makes it difficult to predict if we can meet in person next year. Potential candidates for a face-to-face meeting are pre or post ECCMID (Vienna, 9-12 July 2021) or a US-based meeting. We will keep you informed.

We are planning a series of regional online meetings to foster scientific exchange between ISAP members. Stay tuned.

A 2 day course on PK/PD of anti-infectives was held as a pre-meeting to ECCMID at April 11 -12 2019 in Rotterdam, The Netherlands. The course was organized in collaboration with EPASG and EUCAST and very well attended.

Standing on the Shoulder of Giants: A Tribute to Alan Forrest.

This year’s ISAP scientific meeting started with a session remembering Alan Forrest, who passed away in August 2018. Alan was a wonderful friend, mentor, colleague and a true inspiration to our community and beyond. In this open session, a number of ISAP members shared personal and scientific memories of Alan with the attendees.

Immediately following the educational course, a Scientific Meeting was held in association with EPASG. As per the ISAP tradition, the meeting focused on the presentation of the research of Young Investigators. With 12 presentations from Young Investigators, a diverse group of studies in antimicrobial PKPD was discussed by the knowledgeable speakers. The slides of the presentations can be found in the Archive (available after login for ISAP members).

All participants of the 2019 ISAP Meeting

The meetings above were followed by a social gathering in the lobby of the conference hotel Blijdorp Rotterdam to discuss latest news on PK-PD and beyond and to meet old and new colleagues and friends.

The current Council was elected in 2016 and comprises:

In view of the healthy number of people who nominated for the next Council, Johan Mouton and Vincent Tam kindly offered to retire from Council to provide opportunity for others to serve ISAP.

An amazing feat is that Johan has been on Council for 20 years, with a substantial portion of that time serving as a member of the executive. Indeed, Johan was President Elect of ISAP from 2000 to 2002, President from 2002 to 2004 and Immediate Past President from 2004 to 2006.

Vincent has served on Council for 10 years, with 8 of those years as Treasurer. Both Johan and Vincent have made an enormous contribution not only to ISAP Council but also to the activities of ISAP more generally (e.g. as key contributors to ISAP educational workshops and conference symposia) and to the discipline.

On behalf of all members of ISAP, Roger and other Council members would like to thank Johan and Vincent for their dedicated service and collegiality, and for their kind offer to provide ongoing support to the Councils of the future. Roger would like to take this opportunity to thank all members of ISAP Council for their wonderful support over the last two years. Of special note is Brian who has been an outstanding President Elect; he will be equally outstanding when he takes on the role of President. Brian would like to thank Roger for the work he has done as President. He has provided compelling leadership to ISAP which has expanded membership, organized key educational symposia, liaised strategic collaborations and allowed ISAP to reach new heights of excellence. Roger’s hard work, dedication and passion for ISAP is extremely inspiring to us all.  With most sincere gratitude from all of us to our fearless and amazing leader – Roger Nation!

Election of Council members for the next two years

There was an excellent response to the call for nominations for membership of the next ISAP Council and for the executive officer positions. The composition of the next Council is as follows:

It is truly wonderful to have Jian, Zack, Elizabeth and Elisabet join ISAP Council. The membership of the new Council was ratified by the ISAP members who attended the General Meeting in Madrid. The new Council will commence its term in June 2018.

At the General Meeting in Madrid, Professor Otto Cars was announced as the recipient of Honorary Life Membership of ISAP. In accordance with ISAP Bylaws, appointment to Life Membership was made on the recommendation of Council. Below is a very brief summary of Otto’s outstanding career, including his key role in creating and nurturing ISAP and his contribution to optimizing the use of antimicrobials and preserving their usefulness for generations to come.

Interactions with other organizations

On behalf of ISAP, Ursula Theuretzbacher and Sebastian Wicha delivered a 1-hour interactive workshop to ca. 300 participants at the 18th International Congress on Infectious Diseases held in Buenos Aires in March. After an introduction into PK/PD concepts and targets, participants were actively involved in an interactive session. On their mobile devices or laptops, they used the TDMx web application as an example of a precision dosing tool to work on several tasks around dose individualization of β-lactam antibiotics. The session was a great success and the diverse audience (mainly physicians, pediatricians, pharmacists, microbiologists) from all parts of the world seemed to be able to follow the instructions and to experience how PK and PD variables influence dosing decisions.
At the ASM Microbe conference in Atlanta USA in June, ISAP is delivering a pre-conference workshop entitled ‘Introduction to Pharmacokinetics-Pharmacodynamics: A Basic Primer’. The workshop is being delivered by Brian Tsuji, Hartmut Derendorf, Elizabeth Lakota, Vincent Tam and Roger Nation. A Young Investigator night out for ISAP in collaboration with ISoP is being planned by Elizabeth Lakota on Friday June 8 in the late evening. More details will be posted on the ISAP website as the date approaches.
Following the ECCMID meeting in Madrid this year, ISAP worked with EPASG to deliver an oral presentation session within the scientific program of the 3rd International Conference on Polymyxins. ISAP is actively engaged in planning a joint initiative with EPASG and EUCAST to hold an educational / scientific meeting as a satellite to the ECCMID meeting to be held in Amsterdam in April 2019. ISAP and EPASG have held highly successful joint meetings in the past, including the day prior to the ECCMID meeting in Vienna last year.
ISAP Council is very eager to join with other organizations in submitting proposals for symposia and educational workshops at major conferences in various parts of the world. A number of possibilities are under active consideration.

The financial situation of ISAP is healthy and the membership is growing. However, it is very important for members to respond to the call for payment of the annual membership fee. ISAP is not a large organization and it is a time-consuming challenge to send reminder emails to members to prompt them to pay their annual membership subscription. In this regard, the cooperation of all members would be greatly appreciated. It would also be helpful if you would assist in recruiting new members from within your institutions and networks of scientific and clinical colleagues.

Immediately following the General Meeting in Madrid, a Scientific Meeting was held in association with EPASG. As per the ISAP tradition, the meeting focused on the presentation of the research of Young Investigators. With 13 presentations from Young Investigators, a diverse group of studies in antimicrobial PKPD was discussed by the knowledgeable speakers. Congratulations to Iain Abbott, Astrid Brӧker, and Nicholas Smith for receiving Young Investigator Awards for their excellent presentations.

All participants of the 2018 ISAP Meeting

The meetings above were followed by a social gathering held in collaboration with the 3rd International Conference on Polymyxins, EPASG and the Spanish Infectious Diseases Society. Approximately 100 people attended this function which provided the opportunity for ISAP members to socialize with their colleagues, meet potential new collaborators and enjoy light appetizers and liquid refreshments.

Young Scientist Night Out in Madrid

The night prior to the General Meeting young scientists who participate in ISAP were invited to an informal gathering to network and enjoy the nightlife of Madrid. Over 10 attendees met at the Del Diego Cocktail Bar to mingle and make new connections with peers in the field. Considering the success of the event, ISAP will likely host similar functions in conjunction with future meetings.